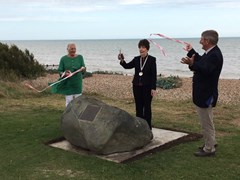 A 2 ton natural boulder in the shape of a seat has been unveiled on the West Kingston greensward to mark where the old Chapel of Kingston was lost to the sea.

Some 250 yards out to sea from the commemorative stone, just South of the Black Rocks which are seen at very low tide, is the site of the Chapel that once served the old settlement of Kingston.  Because of coastal erosion it is said the Chapel was lost to the sea in December 1626.

The idea for a marker was suggested by a Kingston resident and the Council then came up with placing this unusual seating stone.  Advice on determining the wording for the stone was sought from local historian Richard Standing, the East Preston and Kingston Preservation Society and the Ferring History Group.  A full history of the Chapel can be found on the latter’s website.

The seating stone has its own history dating back thousands of years to the Ice Age.

Mid Wales Stone said “This was found in Trawsfynydd in mid wales, by a enthusiastic farmer always looking out for good artwork.  We would class it as a glacial boulder. In the many years that we have been sourcing boulder seats, we haven’t quite know anything like this one.  We are over the moon that this piece has gone to such a stunning location.”

The Welsh stone, complete with a plaque giving details of the Chapel, was unveiled on Friday, September 4th, by Councillor Geraldine Walker, Chairman of Kingston Parish Council.  She said it would give the opportunity for residents to sit in a beautiful spot and look out towards the lost Chapel.

Councillor Walker was joined by members of the Council and the Clerk, who she thanked for their work on the project, and many who also helped including Richard Andrew, John Hickson (Chairman of West Kingston Residents' Association) and District Cllr Terry Chapman.

Note: image shows the unveiling of the marker stone by (from left to right) Cllr Valerie Masson who located the stone, Cllr Geraldine Walker, Chairman of Council and Cllr Roger Wetherell, Vice-Chairman of Council.